Glycosylation is the most common post-translational modification (PTM) in proteins, especially in biopharmaceuticals. It is a critical quality attribute with a wide range of impacts on factors, including such as product stability, bioactivity and safety. However, current glycan analysis methods involve multiple and lengthy sample preparation steps which can affect the robustness of the analyses. Therefore, the development of an orthogonal, direct and simple method is
necessary.

In this study, we used FTIR spectroscopy to compare eight batches (originators and biosimilars) of two monoclonal antibodies (rituximab and infliximab) in terms of glycan composition. These samples have similar but not identical glycan composition.

At least twelve spectra of each batch is recorded. The figure below shows the raw data (before the processing steps) and the glycan composition is measured using a gold-standard method.

After the preprocessing step, we can enlarge the spectral region associated with glycosylation (1179 and 965 cm-1) as illustrated in the figure below. 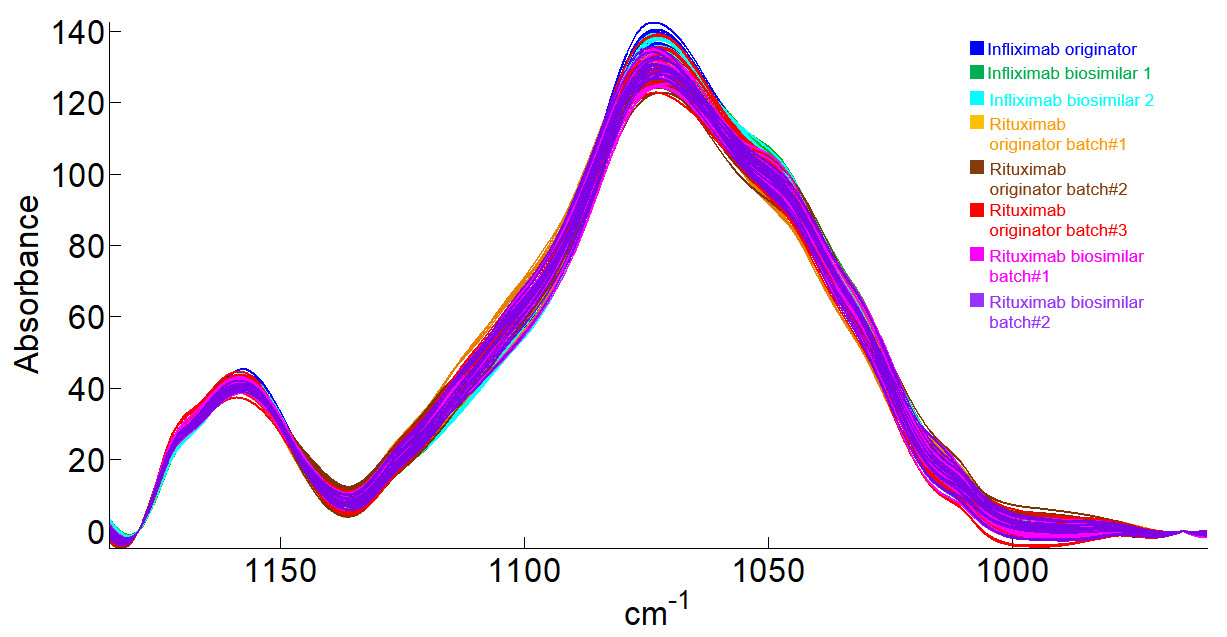 The shape of the spectra are very similar and multivariate and statistical tools are required to highlight differences among antibody glycosylation in this set of data.

Principal component analysis (PCA) is a powerful tool for high-dimension data to identify patterns and to express the data in such a way as to highlight their similarities and differences. This tool reduces the number of variables without much loss of information, taking into account most of the variance. It is an unsupervised analysis: the classification obtained does not suppose any a priori condition on grouping obtained. Whether a group is significantly different from the others was tested by multivariate analysis of variance (MANOVA) where each spectrum is identified by its projection on the first 4 principal components

The result of this analysis is a score plot which is presented in the figure below. In this plot, every point (star) in this plot is the projection of one spectrum in the space defined by the first two principal components (PC). The different samples are identified by a unique colour indicated in the right caption.

Even if the separation is not perfectly clear, all the spectra of rituximab (originator and biosimilar) are on one side of each plot and all infliximab batches (originator and biosimilar) are on the other side of the plot. While the representation provided in the previous figure reveals significant degrees of separation between the antibodies along the first 4 PCs, considering them all together requires use of MANOVA (see Table below).

We use cookies on our website to give you the most relevant experience by remembering your preferences and repeat visits. By clicking “Accept All”, you consent to the use of ALL the cookies. However, you may visit "Cookie Settings" to provide a controlled consent.
Cookie SettingsAccept All
Manage consent

This website uses cookies to improve your experience while you navigate through the website. Out of these, the cookies that are categorized as necessary are stored on your browser as they are essential for the working of basic functionalities of the website. We also use third-party cookies that help us analyze and understand how you use this website. These cookies will be stored in your browser only with your consent. You also have the option to opt-out of these cookies. But opting out of some of these cookies may affect your browsing experience.
Necessary Always Enabled
Necessary cookies are absolutely essential for the website to function properly. These cookies ensure basic functionalities and security features of the website, anonymously.
Functional
Functional cookies help to perform certain functionalities like sharing the content of the website on social media platforms, collect feedbacks, and other third-party features.
Performance
Performance cookies are used to understand and analyze the key performance indexes of the website which helps in delivering a better user experience for the visitors.
Analytics
Analytical cookies are used to understand how visitors interact with the website. These cookies help provide information on metrics the number of visitors, bounce rate, traffic source, etc.
Advertisement
Advertisement cookies are used to provide visitors with relevant ads and marketing campaigns. These cookies track visitors across websites and collect information to provide customized ads.
Others
Other uncategorized cookies are those that are being analyzed and have not been classified into a category as yet.
SAVE & ACCEPT