The 1H / 2H exchange kinetic provides information about protein conformation, since the exchange rate depends on the stability of the secondary structure and on the accessibility of the peptide bond to the aqueous environment. It is an efficient way to compare the tertiary structure of proteins in several experimental conditions.

We have demonstrated that FTIR spectroscopy can effectively monitor hydrogen-deuterium exchange to compare the protein structure and conformation under two distinct storage conditions.

Samples are exposed to a flow of nitrogen containing 2H2O vapor. Kinetics of 60 minutes were recorded and evolution of the proportion of exchanged amide bonds were computed. 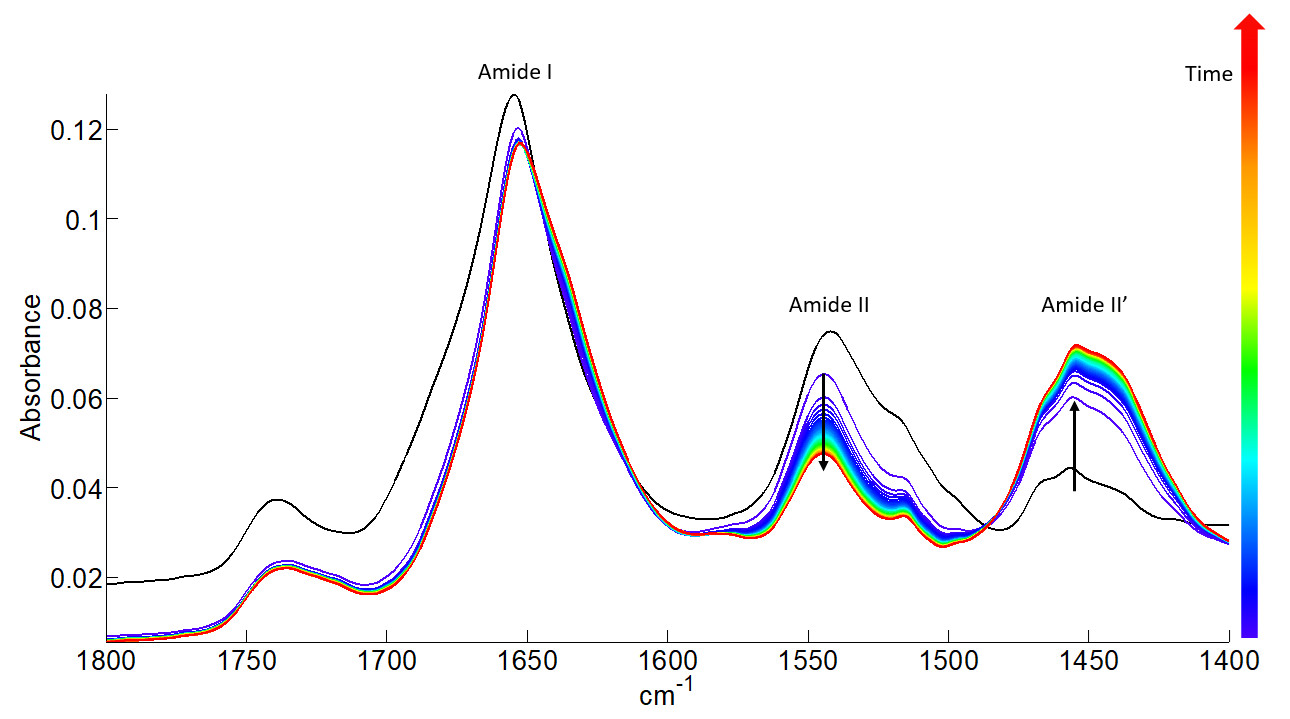 All the FTIR spectra (61) of one kinetics recorded for protein 1 condition 1 sample. The FTIR spectra are gradually coloured from blue to red according to increasing deuteration time.

Upon H-D exchange, the intensity and position of the amide bands are strongly affected. The Amide II band around 1542 cm-1, which is mainly due to the in-plane N-H bending vibration of the peptide bond, shifts toward lower wavenumbers by the H-D exchange to form a new band called Amide II’ (1454 cm-1). It is easily seen that the intensity of the Amide II band decreases while that of the Amide II’ band increases during the deuteration process.

The percentage of amide protons that are exchanged during the deuteration can be determined as a function of time from the ratio of the areas of Amide II and Amide I bands. 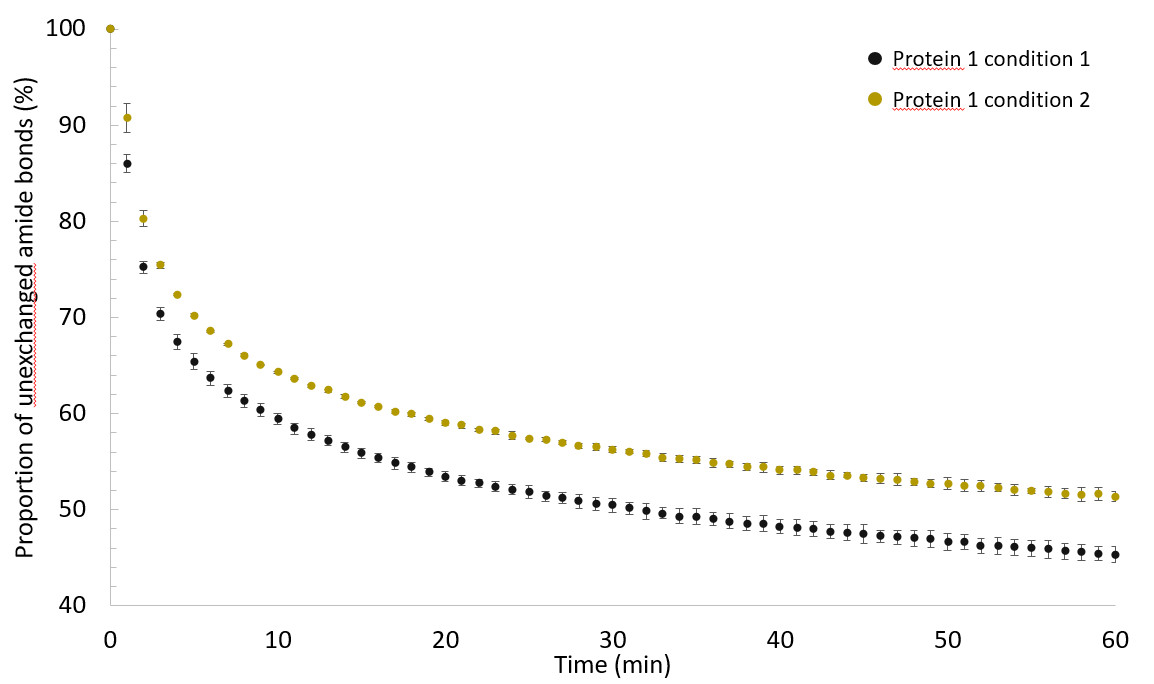 Evolution of the proportion of unexchanged amide bonds computed between 0 and 100% as a function of the deuteration time reported between 0 and 60 minutes for each condition of protein 1. Vertical bars indicate the standard deviation (SD) obtained from three independent experiments (mean ± 1SD).

It was found that 1H/2H exchange kinetics were slower for the protein 1 in condition 2 than in condition 1.  We have thus evidence that the storage conditions affect the structure and conformation of protein 1.

We use cookies on our website to give you the most relevant experience by remembering your preferences and repeat visits. By clicking “Accept All”, you consent to the use of ALL the cookies. However, you may visit "Cookie Settings" to provide a controlled consent.
Cookie SettingsAccept All
Manage consent

This website uses cookies to improve your experience while you navigate through the website. Out of these, the cookies that are categorized as necessary are stored on your browser as they are essential for the working of basic functionalities of the website. We also use third-party cookies that help us analyze and understand how you use this website. These cookies will be stored in your browser only with your consent. You also have the option to opt-out of these cookies. But opting out of some of these cookies may affect your browsing experience.
Necessary Always Enabled

Performance cookies are used to understand and analyze the key performance indexes of the website which helps in delivering a better user experience for the visitors.

Analytical cookies are used to understand how visitors interact with the website. These cookies help provide information on metrics the number of visitors, bounce rate, traffic source, etc.

Advertisement cookies are used to provide visitors with relevant ads and marketing campaigns. These cookies track visitors across websites and collect information to provide customized ads.

Other uncategorized cookies are those that are being analyzed and have not been classified into a category as yet.